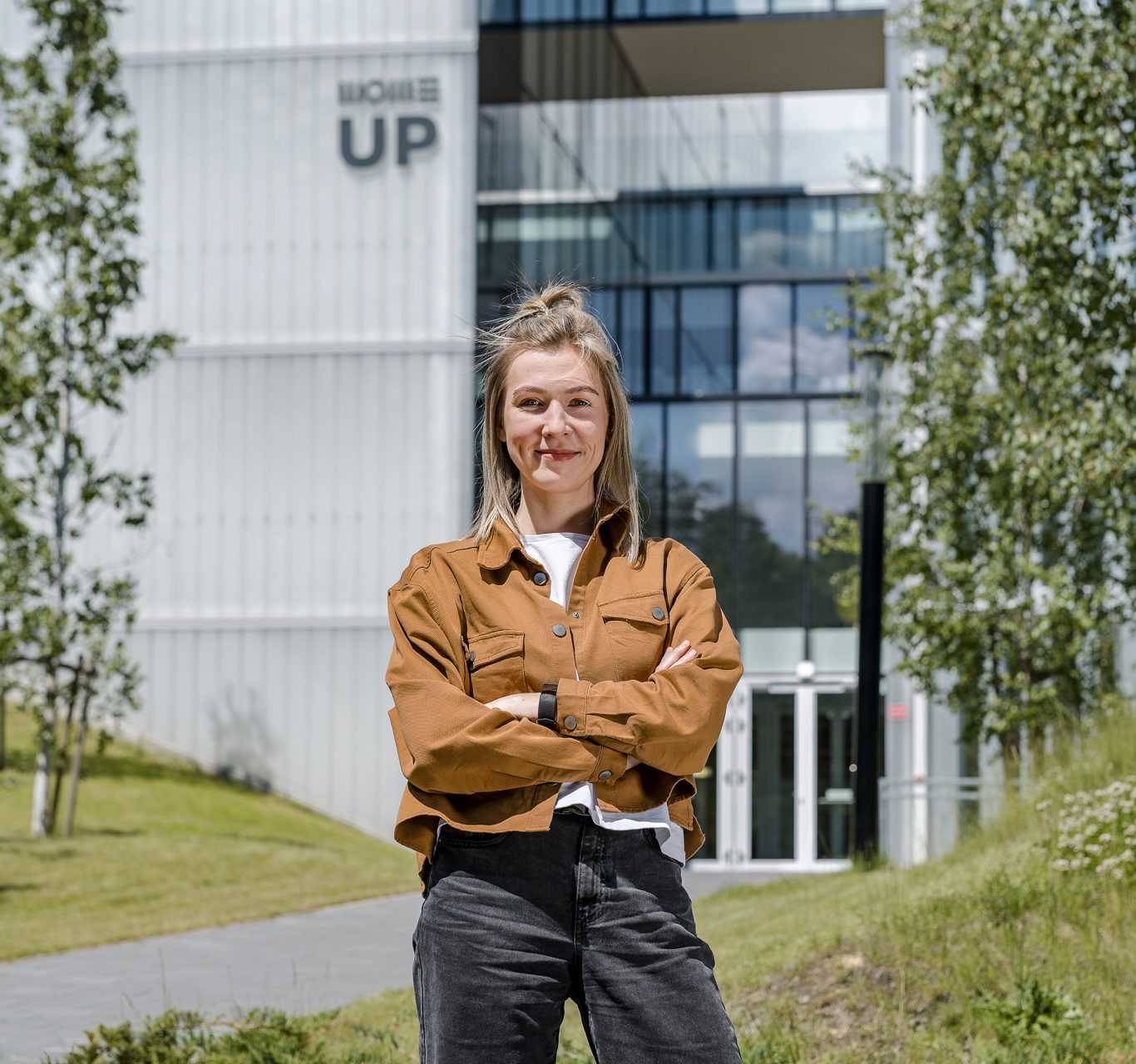 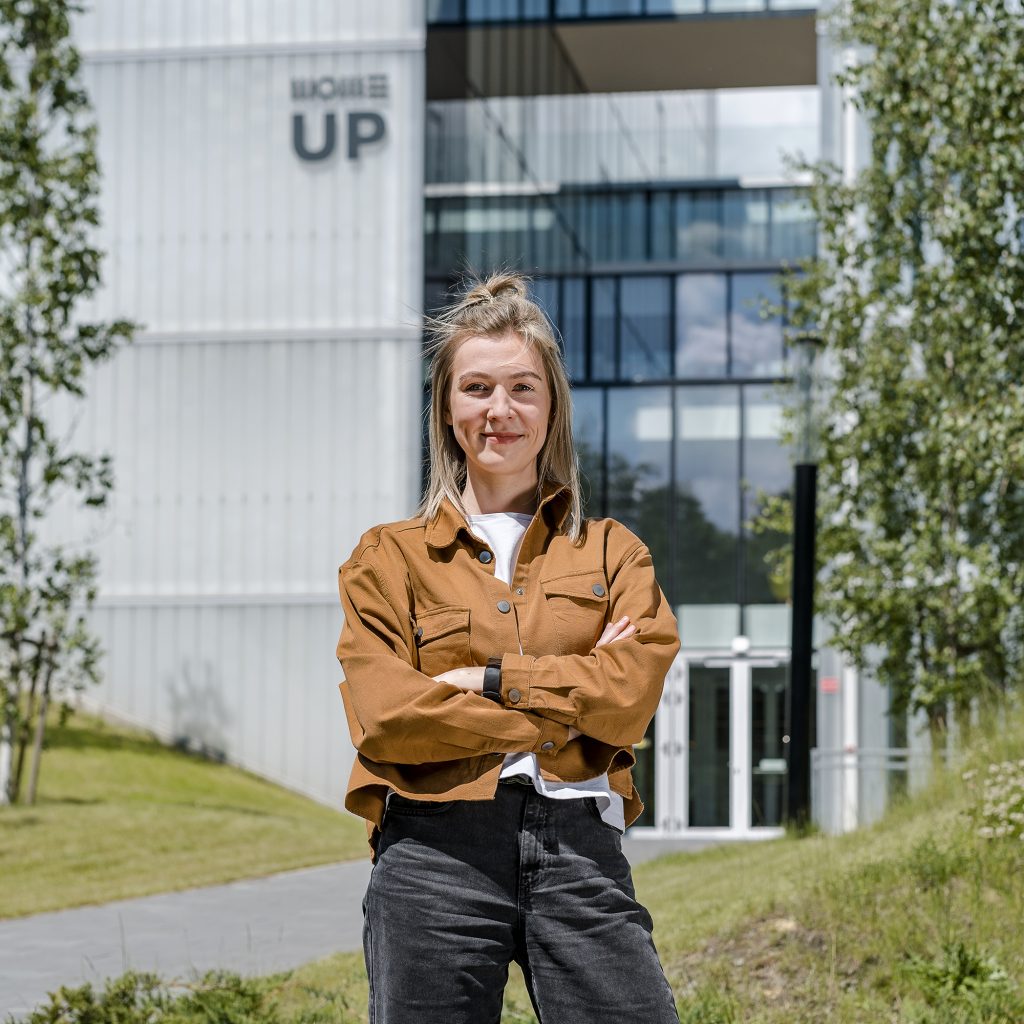 Shaping a creative playground for design – Interview with Lāsma Ivaska, the Director of MOME Innovation Center

Despite her young age, Lāsma Ivaska went a long way before arriving in Budapest as the Director of MOME Innovation Center. She studied in Glasgow and moved back to Riga after graduation, where she got involved in urban development projects. She established an innovation-friendly zone in the city for local startups and also participated in an educational movement called Repair Café. Beside her professional background, we also talked about the smart city, technological necessities, sustainability and the future of the MOME Innovation Center.

We can say that you are a world citizen, but Budapest is definitely new for you. What was the main reason for you to apply, when the opportunity came along to work here?

Well, I’m very interested in cities, urban design and how cities around the world deal with the shared challenges in mobility, sustainability, changing people’s habits, waste management. I’ve been always interested in living in different cities, and when the opportunity came in Budapest, it was even more interesting because I had never thought about working or living here. So it was a huge surprise and and exciting idea, but the main factor was a huge professional challenge, because the things that we are doing in Riga, where I’m a part of creating the first innovation district – the initiative is super important on a local level. But the impact we can achieve there is also limited to the region. However, here in Budapest, with the capacity the Innovation Center already has and the combined knowledge with the academia and students, the impact of this center can be huge in the future.

From my perspective the VEFRESH project, which you initiated in Riga, is some kind of a Latvian Silicon Valley. Were there any especially Baltic challenges the project had to face?

I think the challenges that we had are somewhat shared by the larger Eastern European region. Most importantly, cities, startups and innovation communities are not very interested in collaboration and public-private partnership projects. We have separate university research projects, we have something that the city is doing on its own, and we also have the private sector developing new smart city solutions. But there aren’t a lot of projects where these three sides are coming together.

A lot of cities articulate in their future strategies that they want to become innovative, agile and smart, but the innovation community doesn’t really want to work with them, because the city is often the worst client a startup can have.

The bureaucracy is high, the sales cycle is very slow and testing solutions are difficult. And if you’re a new company, you cannot really afford spending that much time.

You mentioned the hot buzzword of “smart city”. It might be a little bit provoking, but I can’t skip the question… Your area of expertise touches on certain aspects of the smart city, which is definitely an emerging field, meanwhile there are countries with polarized parallel societies. One half can take advantage of the technological innovations, the other is simply left out. I guess, it’s not just a Hungarian phenomenon, but a global tendency too. What can the idea of the smart city offer in these circumstances? Is there any potential to bridge these huge social gaps and bring those social realities closer to each other?

Also, a nicely designed street can add to a smart city, if you, your kids and your grandparents feel safe on that street. The obsession with technology is not a solution for all of our problems.

We really have to decide case by case where it makes sense to introduce thousands of sensors, and where is more need for smart infrastructure design instead.

To address the other part of your question about the divisions in society, I think digitalization as a process will not stop. I don’t think there is a future where we don’t use digital means of communication. This is something that we have to address in terms of education, in terms of programs for seniors and other people who are maybe not as tech savvy – it’s a question of good educational design.

In Riga you set up an innovation friendly zone which is basically a test track for local startups. Does this zone have any general objectives or it all depends on the individual startups and their motivations?

I’m very glad that you ask about the test zones, because this is something that our team has been actively working on for the past two years. Just like a month ago, we finally got the official stamp of approval – the local government passed the legislation of innovation pilot zones in Riga.

When we started working with the smart city industry, we understood that one of the main problems the industry is facing, is that once they develop new tech solutions, it’s very difficult to actually test them in real circumstances.

For example, if you create a small sensor that detects noise levels in the city, it can take you more than half a year to actually get the permits to deploy your solution for testing. A startup usually doesn’t have this much time, resources or energy to spend. That’s why we came up with this idea of zones where there would be a fast track for those who want to test something in real life.

Are there any tested products or services yet?

For example there is this artificial intelligence powered pedestrians and cyclists counter. It’s a very simple solution, which basically registers that someone has passed by. For years in Riga we had been talking about whether we need bike lanes or don’t. The one part is saying there aren’t enough cyclists, the other part is saying, there are more cyclists than you would imagine. But there wasn’t any permanent data collection available to answer the question. In this case, we put the counter on, and found out that within six months, half a million cyclists and pedestrians were passing this one road, which, of course, shows that this is an important mode of transportation.

Here in Budapest the bike lane discussion is totally the same. Do we need it? Why we need it? And so on…

I think it is the same all across Europe, everyone is talking about it, and I can only suggest to get a permanent data stream of what is happening. Then you can actually analyze the situation, rather than just relying on one person’s or department’s perspective.

Another interesting part of your CV is the Repair Café in Riga which is an educational event series allowing city dwellers to learn useful tricks about electronic device repair. Is it accurate to say that the main part of this project which resonates with you is sustainability?

Yes, it is sustainability, definitely. But our goal is not merely to teach people how to repair things. It is more to get the idea of repairing things normalized in our perception. A lot of people and also me a few years ago were living the idea that if something breaks, you need to replace it with new product. The idea of getting your broken earphones or worn clothes repaired is not something we think about on a regular basis, because these repair workshops are often not in the big shopping malls or in other convenient, nicely visible locations in the cities. You have to actually search for them… so they don’t cross your mind. Repair Café is our attempt to make the activity of repairing things popular again.

Talking about new ideas… MOME Innovation Center is a hub for research and development with a goal to incubate and test new ideas. What could the opportunities be of such an institution within the context of an arts and design university?

There are not a lot of universities, especially arts and design universities, that have made the strategic decision to have market orientated projects or to bring the design capacity closer to the market.

The fact that MOME has made this decision makes it a super interesting partner for a lot of companies and other institutions.

If you think about any kind of innovation projects, you normally have a technological partner or a science partner and then a business partner. But what MOME could bring in is the design capacity, which often gets left out.

There are currently running research projects at the center involving data gardening, smart textiles and future forecasting. Do you see any other must have research fields?

Not a new, but an important one is to apply user experience design ideas to public sector services and also to the legal industry. Both areas are extremely non-user-friendly. The second thing, which I am very interested about, is how big data and AI algorithms are coming into our daily lives. Algorithms need to be designed in a just and non-discriminatory way. We often think of data as inherently objective, but that’s not the case – people unintentionally include their own bias and perspective in the data collection methods and result analysis. So, I think data analysis design would be a good field to look into. How can we actually make big data friendly to all of us?

An algorithm doesn’t have ethics or social awareness…

Exactly! So it’s kind of a design task – we have to design good data analysis tools.

Last but not least, let me ask you a purely speculative question. What role could the Innovation Center play in the future, let’s say, in 2030? What’s your vision?

I hope that in 2030 MOME will be known by the private sector as the creative playground for design, creation and co-creation. And also, I would love to see some successful design orientated and social design oriented startups coming out of MOME.