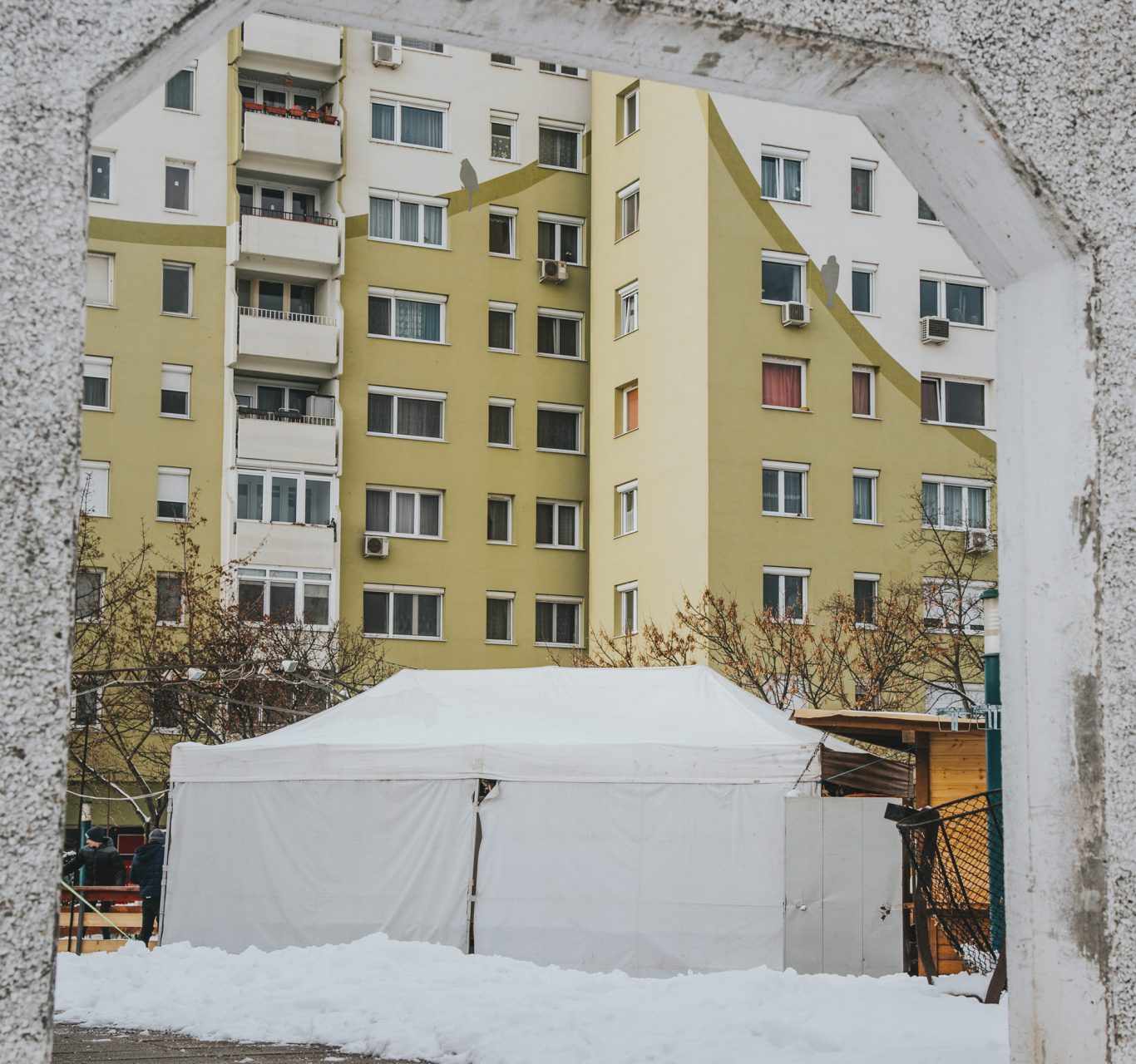 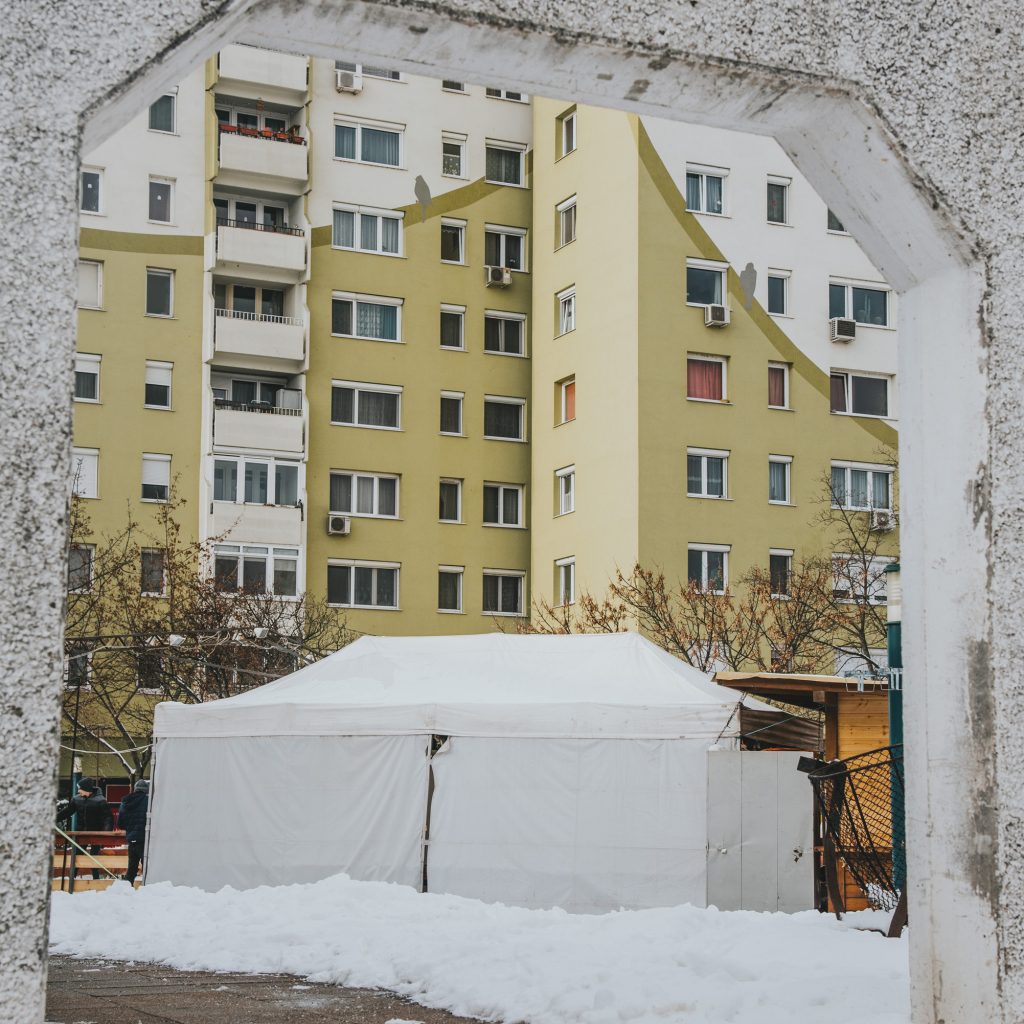 Our values are challenged by today’s society on every front. People are presented with ready-made identities by the media, their superiors and cultural scenes. Ilka Olajos’s works are characterised by a certain aloofness, prompting us to take a step back and confirm or change our convictions with deliberation. Historical monuments, national holidays and monolithic panel houses – the subjects of Ilka Olajos’s photos point out how influencing ideals may become the objects of reflection when coming into conflict with our reality.

Though our heroes of old have faded into the oblivion of war, can they be put back on a pedestal? Do we have the possibility to cherry pick their virtues according to our current standards while disregarding their vices? Just like the monuments we see toppled in countries with a colonial past, the statues in Ilka’s photo series Oblivion exude a sense of permanence and at the same time reflect our constantly changing attitudes to them.

As a result of the various views being layered on top of each other, solid perspectives are replaced by fuzzy contours and indefinite shapes. The uncertainty of the perspective undermines the basis of reality of the photos. Though the locations and the subjects can be identified, the pictures have a painting-like graphical texture, as if seen through a thin veil. In these photos, blurry silhouettes stand in the place of replaceable heroes. Though we pass by monuments on the street and in parks each day, we rarely recognise who they are or muse about the victims they pay tribute to.

The polarisation of social discourse tends to cause our heroes of old to degenerate into political tools, who are this way often exposed to revisionism. In circles with identities deeply rooted in national myths, historical heroes are overvalued, keeping their memory alive. In her Warsaw series, Ilka mostly uses wide shots with the exception of a single portrait photo depicting a man wearing a balaclava in the colours of the flag. This perspective and the composition choices enable us to spot the idiosyncrasies of the pictures, turning them into tense still lives of the nationalist demonstrations so familiar to us. The torches, the smoke, the red and white colours, the barricades all work together to create a sense of threat. Depending on the spectator’s preconceptions, this tension can be seen as heroic, like in traditional paintings of scenes from our revolutions, or intimidating.

Housing estate in a different way

In Ilka’s Housing estate in a different way series, the square shapes of the buildings form the basis of the constructivist compositions. The ones that work best are the pictures with uniform colour blocks, and can thus be interpreted as 2D colour compositions. Use of long-focus lens renders the buildings axonometric, just like in blueprints. In addition, in the absence of perspective convergence, the scale of the buildings is hidden from view, giving them an almost dollhouse-like appearance. The architectural spaces look sharp, palpable, precise and well-defined. The rigorous geometric compositions lend a collage-like quality to several of the photos. No wonder Ilka copy pasted some of her photos to make actual collages.

The idealism underlying the architectural vision of the buildings is completely gone from public thinking today. The ideal of an infrastructure providing housing to everyone using state-of-the-art materials has become a bunch of cramped spaces used for storing human bodies. These buildings are mementos of the housing vision of the socialist era and the real lives of the inhabitants on the portraits.

Ilka Olajos graduated from the Photography MA of the Moholy-Nagy University of Art and Design in 2022. The supervisor of her masterwork Housing estate in a different light was Miklós Gulyás, consultant was Gábor Arion Kudász, and thesis consultant was Péter Haba.