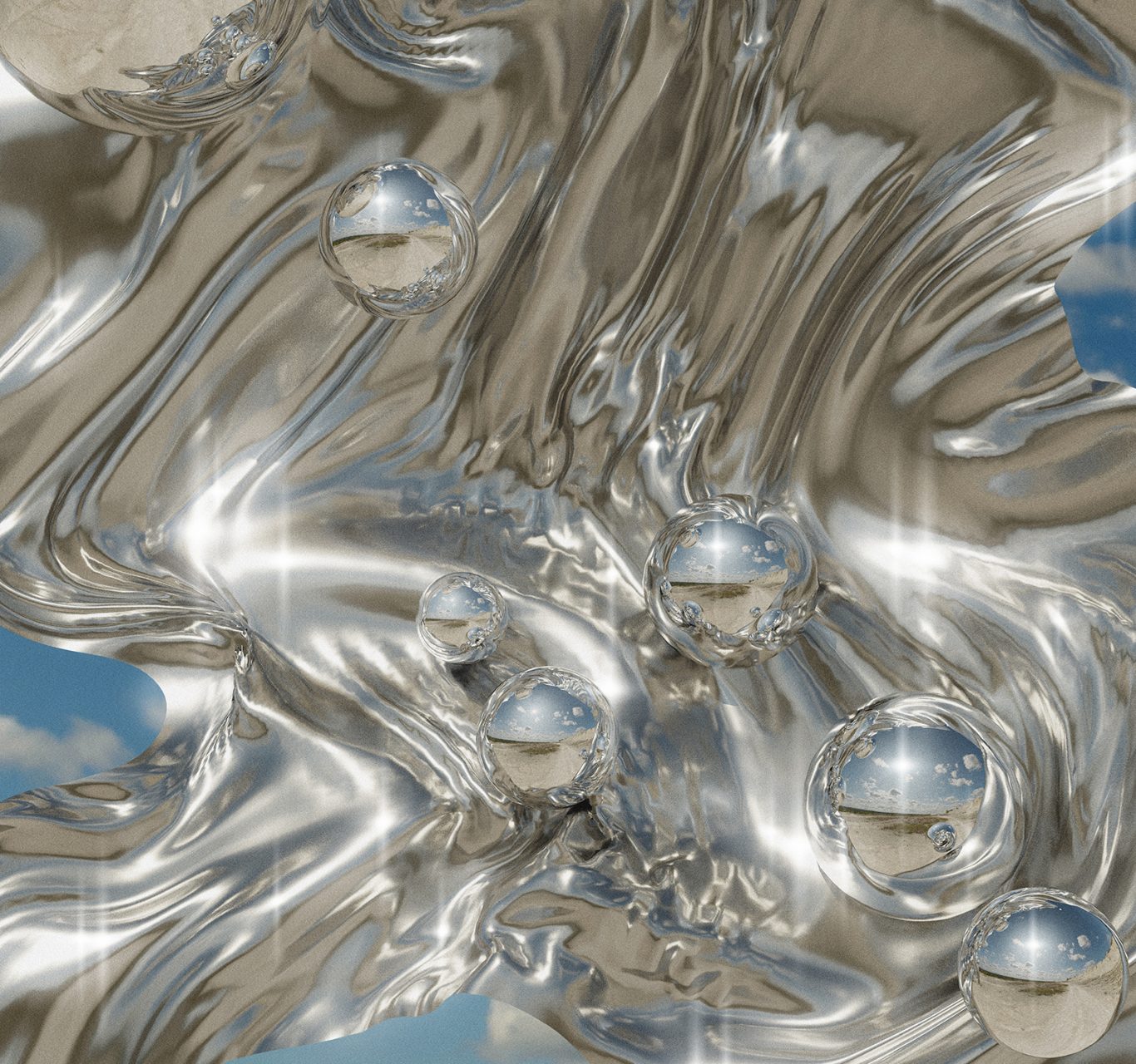 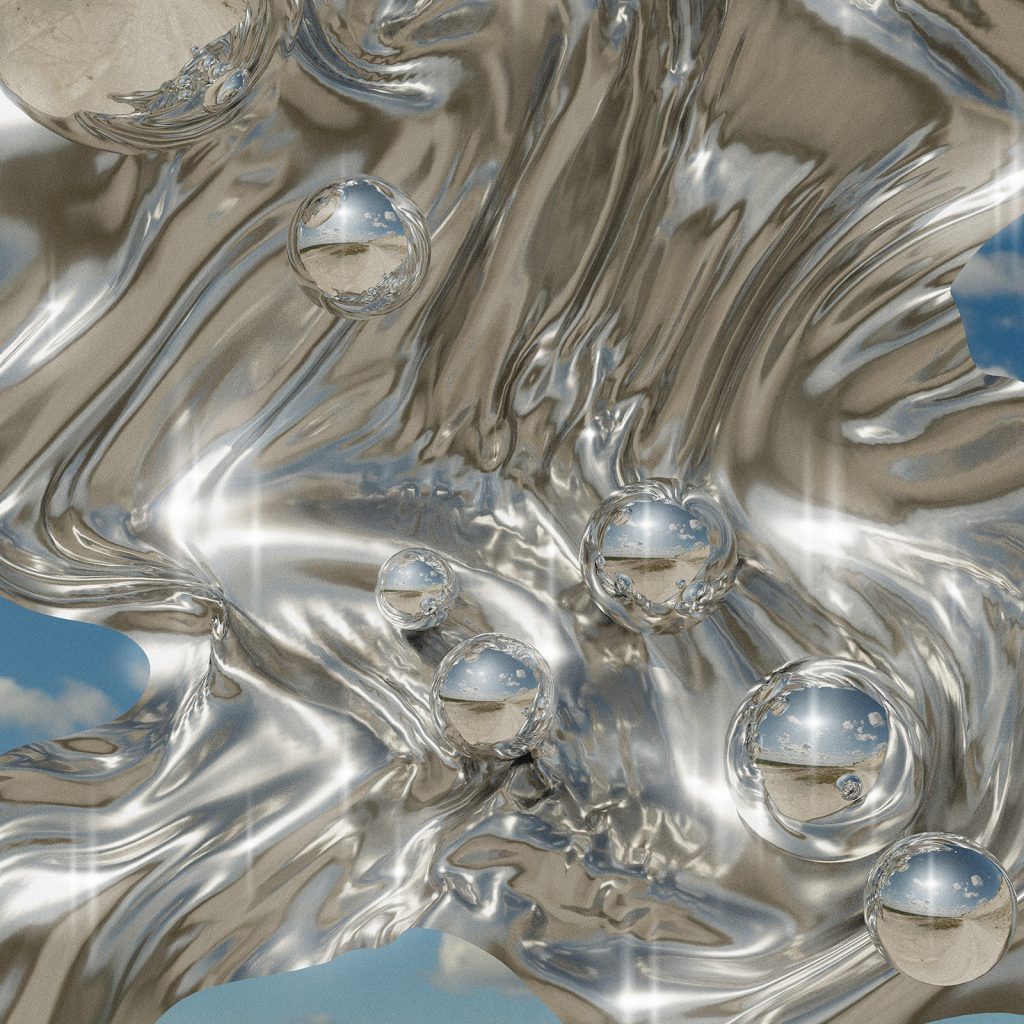 Anna Rósz’s portfolio gives us a glimpse into her personal virtual space through three-dimensional modelling. She often explores the role of femininity and motherhood, as well as issues of intimacy and sexuality. Her graphic designs feature dream-like spaces and phantom-like, reflective figures as imprints of various emotional states.

Her shapes draw on the virtual world, a fictitious landscape where the human body is disconnected from reality. In her concept, she takes a look at the negative and positive effects of digital space occupation, and presents her unique system through the filter of her subjective experiences.

“Most often my works are based on occurrences and thoughts that are close to my heart. Music, dreams, sensitivity and various forms of synaesthesia are frequent sources of inspiration for me.”

The works created in 3D undergo only minimal postprocessing. Normally, only the saturation is adjusted, and the completed renders are 99% identical to the final result. In addition to photo manipulations, she also makes small and large size prints.

The picture pair Last Minute depicts the last stages of melancholy and anxiety, illustrating the process of breaking away from them and getting absolution. In her graphic designs, the human body is disconnected from reality, and her figures are placed in an ethereal, infinite space of otherworldly beauty.

Although Happy Place=)) was completed before Last Minute, it can be seen as a sort of sequel, as it is associated with an extremely rare, purely joyful period. The fluid female forms blending into aesthetics of the cyber space depict this happy state of mind through the subject of physicality and feminity.

“I find that pastel colours are better suited for visualising playfulness and carefreeness. This is the virtual space where I can create art freely, and this is where I feel at home.”

Anna has a highly diverse artistic toolkit and enjoys experimenting with various virtual technologies. Her artwork Symptom Disease examines the relationship between symptomatic treatment and genuine cure, and its extremes,using a 3D manipulation of a 2D photo, rounded off by ASCII art. ASCII art is a graphic design technique that uses computers for presentation. Characters are arranged based on colour and contrast, creating intriguing graphic design practices. Using a node – a JavaScript runtime environment – characters entered by the artist, including numbers and punctuation marks, are pasted on a 2D photo or render imported into a 3D space.

“I like this technique because the shape of the photo changes depending on the characters you enter – so in this sense it interacts with the artist. Discovering this new type of communication was new and enjoyable experience, as if I had brought something to life.”

In addition to 3D graphic designs, Anna also creates videos. One of her technologically most intriguing works is Ghost In The Shell. It was completed as a project concluding the semester of a course consisting of four modules and was preceded by group work. Each group was assigned a different topic, and the students were tasked with creating a world envisioned by them.

“Here I was required to develop the character of a wise person who invented a drug which had a contraceptive side effect – all this in an imaginary universe, where giving birth is the greatest prised above everything.”

The fictitious character initially was unaware of the effects of the drug, and so they took more and more, which began to affect their social status and mental health. The title Ghost In The Shell also reflects on this, a crazy cycle that is impossible to break and eventually fully consumes the individual. Anna was tasked with exploring the subject in the context of an abstract social purpose advertising, and later changed it so it could also work on its own. She used motion capture technology, a process of recording the movement a person, and using that information to animate digital character models in 3D computer animation. As a result, the digital character is making the same motions as the live person.

Another one of her series, Phase Zero examines the link between birth and death. The process of constantly being shaped throughout life and the effect of interacting with others on the self is symbolised by chrome-like, hard, and at the same time, fluid abstract shapes. In the project Phase One reflecting on birth was completed first, followed by Final Phase, which is about death and passing. Anna wanted to visualise both concepts at the same time, giving rise to Phase Zero incorporating all phases of human existence.

Anna Rósz is a Students of the Media Design BA programme of the Moholy-Nagy University of Art and Design. Other works by Anna are available HERE and HERE.

Her video Ghost In The Shell was completed in the fourth module of the Media Studies course of the Moholy-Nagy University of Art and Design, with Noémi Fábián, Antal Bodóczky and Béla Hegyi as her supervisors. Narrated by: Aoife Murphy, dancer: Nóra Barna, another Media Design BA student.

Phase Zero was exhibited this summer at Easy Art Space.