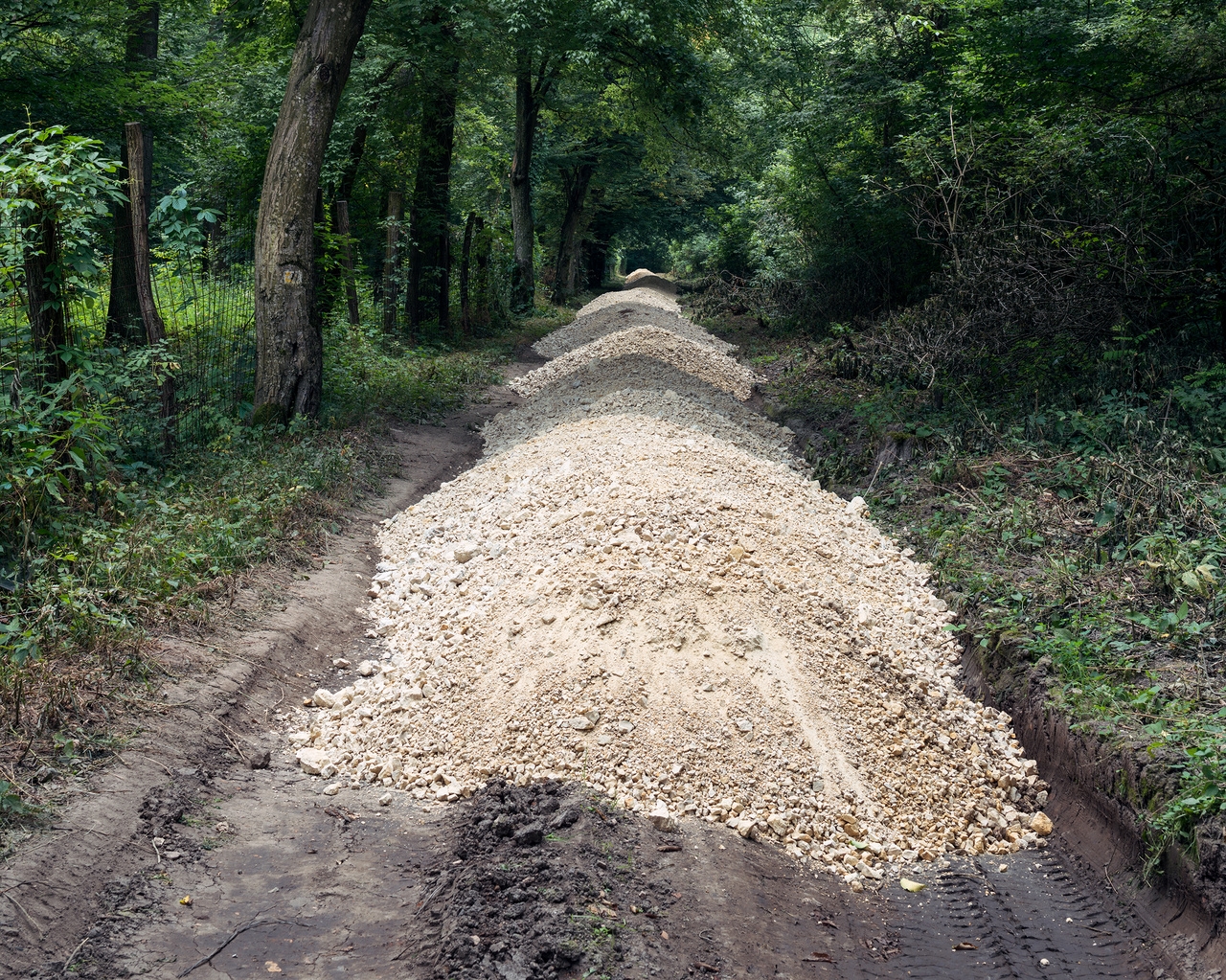 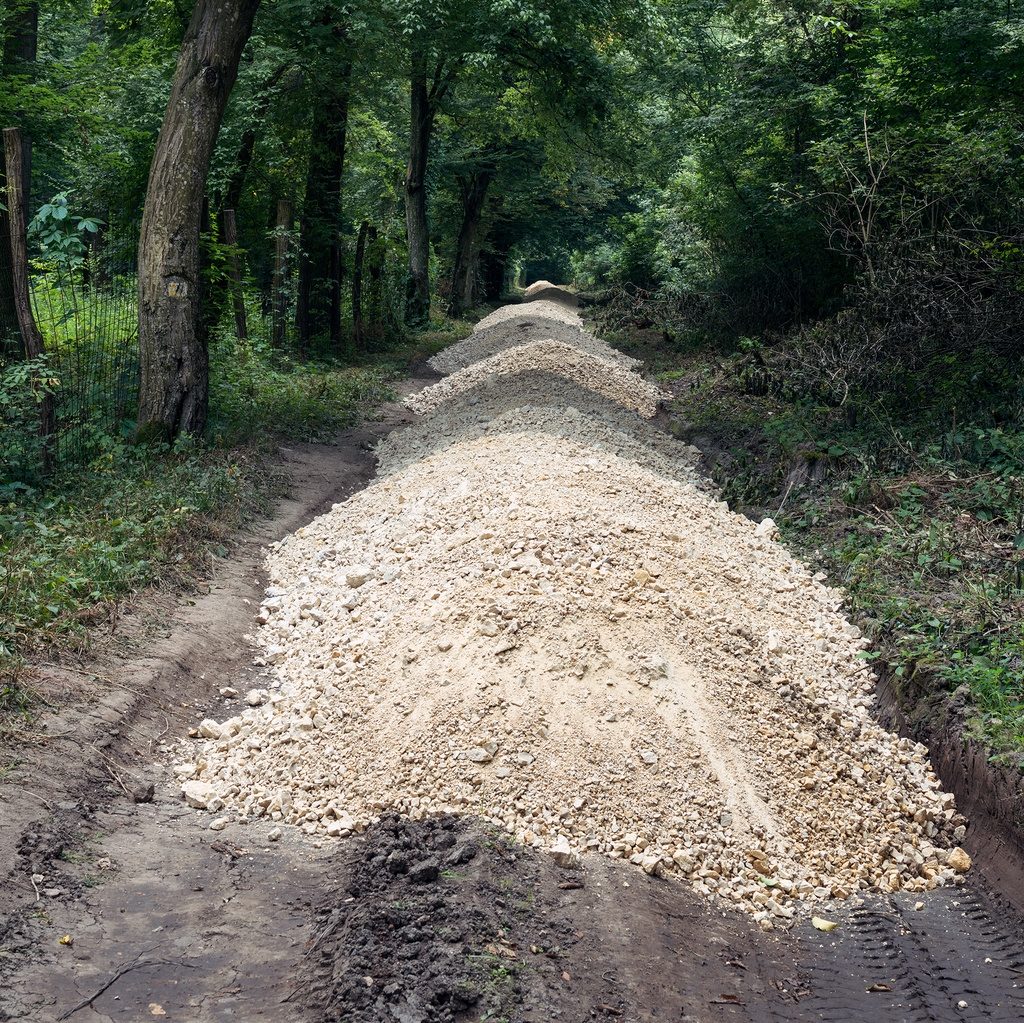 It is cold outside, the line of the horizon is foggy, the rising sun paints over it, you can see the edges of the stencil houses hastily observed from the corner of the eye, the hiding place of the forest, the endless length of the path, the curving arch of the Danube. Although the endpoint of the route was unknown to the woman fleeing the Soviet troops, her fatigue was overcome by the hope and desire for life. Decades later, the route is still unknown to the photographer, her grandson. Yet the thread of her family history takes him back to his grandmother’s former starting point. Sixty years later, a “sought-after” person, the never-known dental grandfather, is considered to be the reason for this journey. Although it is a hopeless undertaking even at the beginning, it is a coherent solution that escaped into an artistic concept. Anthony Paul Marchetti has repeatedly had to travel the way back from America to the vicinity of Szeged, the stations of his travel photographs make up a series of Bricolage¹: an ensemble of places and objects observed, collected, and found. Portraits of people of the same age as his grandfather, shots of objects left on the road or left in spaces. Identity forming, identity building units.

As a descendant of a short but even stronger love, working to decipher the promise of a meeting made in the heat of escape and never becoming fulfilled, for Marchetti the road itself comes to the fore, while the pragmatism of collecting shows the distance between bridging space and time. The photos translate the distance into the present, that is, transforming the subject from the individual to the general. The history and the story are built up along with hypothetical sites and existing but accidentally found individuals, turning back to themselves and becoming an example of what so many people experience today.

An empty ampoule pulled out of the drawer is a found object, while it is also a symbol of the intoxicating, sheltering effect of landscapes that can be “inhaled” with our senses. Walking on foggy, frosty, barely trampled paths, on the jaws of detours, on the walls of interlocking houses, the steps and clicks of the journey act as painkillers, the gingerbread hearts unpacked from newsprint sweeten the angles of the search, while the beautifully put together scarf, jacket, and hat highlighted from concrete space evoke the plan view of memory in us.

Observing this series of photographs, we understand that while the journey is within us, we must first make the detours of remembrance to realize it. The photographs are the hope in the past and present of hopelessness. One part of the series is in a different style compared to the others, a black and white composite photography, where we can recognize a male figure, cheerful girls, a fence, and a house exposed to each other.

Time is what cannot be expressed, but existing itself requires metaphorical description. In the awareness of this, the artist has chosen the means of highlighting and freezing. “One of the paradoxes of non-linearity is that it can depict non-sharp phenomena sharply and clearly.”² Each color photo has a sharp focus: zooming in on human faces, individual full-length or half-shaped portraits, isolated garments, objects found on tables and in drawers, which can already be interpreted as still lifes. The beaded pair of pink gingerbread hearts taken home in a plastic bag, forgotten on newspaper, stuck up on a wooden stick on a dark background appear as a Central European still life, while the kitsch, a joke (“Italian style” on the puzzle page) that can be read from the composition, shows the still valid, often visible fusion of the object culture of the city and the countryside. Collecting came up as a parallel between research and work methods, from the tradition of which we can highlight a similar object in its motif. Goethe created his collection with more than forty thousand items from 1775 to 1832 which included manuscripts, works of art, minerals, copies, books, and other curiosities. After the death of the poet and scientist, his secretary took an exact inventory and published the collection.³ The item no.110 was interpreted to have stuck out of the collection of natural objects since it is “a small piece of a cake from the city of Kasan”, according to Goethe’s note, was sent by a mother to her Cossack son during the French war. “The letter and the bag with the cake traveled through France and Germany and finally found the addressee in Creutzburg near Eisenach.”⁴ Marchetti’s “found” still life localized somewhere between Budapest and Szeged, however, we find them so familiar. We became the recipient of this photo while it enters into the transformation phase of digitization for an upcoming exhibition in France.⁵

Anthony Paul Marchetti was born in 1979, graduated from the University of Minnesota, exhibited in several places as a photographer, and in 2016, as a MOME Fulbright Scholar, he was able to revisit his grandmother’s supposed and realistic routes while capturing the paradoxical sights, scenic landscapes and distinctive faces of this region.

While searching for Paul, countless Pál gets in his way who can be photographed: in the small garden, dressed for the occasion or skeptically looking at the camera, almost posing in the wool-covered, warm armchair of the civic apartment or sitting on the kitchen chair, ready to talk. The artist searches for his potential grandfather, while he knows that this search provides one of the sources of meaning for his own identities,⁶ and the series of photographs is a traceable footprint of this construction process. A common element of the male portraits is the posture that the depicted persons represent despite their poor living conditions. Type variations of the possible predecessor presented with perfect presence or looking away, dementia inward-turning versions.

Life paths similar to the Marchetti family can be found in large numbers in the region, just think about the history of the Goldberger family. ⁷ Arriving to Óbuda as blue painters, and in almost three centuries, from generation to generation they built up one of the most significant and modern textile factories in Europe. The family had been broken up with the Nazi invasion of Budapest.⁸ The head of the family died in the Mauthausen camp on the day of liberation, and Leo’s three children as survivors and heirs at all levels to operate the textile factory, face the impossibility of restarting and are forced to leave Hungary permanently. Leo’s daughter, the elderly Goldberger Friderika living in Paris today, was photographed by her granddaughter Sacha Goldberger as “Supergrannie,”⁹ dressed in stylized costumes for movie stars, alluding to a base that requires the superpower of family restarts. Trampling the roads as an act of fine art and photo-based recording of the route as an artifact was embedded in art history with Richard Long’s “A Line Made by Walking” (1967). Treading and making the same journeys all over again as an identity-forming act appears at several artists. Photographer Mikael Levin traveled in the mid-1990s, researching European roads, Jewish communities, and traces that his father documented as a war correspondent between 1944 and 1945. Fifty years later after his father’s journey, Levin only photographed landscapes researching identity projections hidden in them.¹⁰ In this project too, photography is important as a space-time-continuum station, where the linear perspective of interpretation cannot be realised. Behind the fates that can be analyzed similarly at the individual and community levels, instead of disappearing into the great unknown of history, artistic restarts as specific “survival strategies”¹¹ can offer hope. The photographs in these cases are therefore no longer documents, but symbolic signs, references, bricolages. The photographing of individual objects and the clothes of family members can even take the form of Gábor Arion Kudász’s “Memorabilia” series.¹² The artist remembers with the help of her mother’s clothes. This for the camera is the Ariadné’s thread which leads her out of the maze of pain into the memory of a reality without melodrama. Leads into the common.

Anthony Paul Marchetti’s family history-driven photo itinerary leaves the question open of what happened to Ariadne. The young woman, who felt in love at the refugee camp in Vienna, on her way to America could not know yet that her loved one would never follow her, nor that she was already pregnant halfway through her new life, out of the maze, with the thread of hope in her hands.